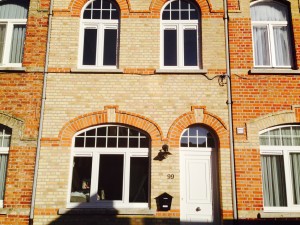 Ipericus (middle) and  Ipericus Two (on the right) are located in the center of Ypres next to the ancient city walls dating back to the Middle Ages. You’re close to the market, extremely close to the walls and with plenty of parking space in the neighborhood. Built in 1922 right after WW1.

During the autumn and summer you will find a table and chairs outside each small courtyard to enjoy breakfast, a coffee or have a smoke.

Origins
Ypres is an ancient town, known to have been raided by the Romans in the first century BC. During the Middle Ages, Ypres was a prosperous Flemish city with a population of 40,000, renowned for its linen trade with England, which was mentioned in the Canterbury Tales. As the third largest city in the County of Flanders (after Ghent and Bruges) Ypres played an important role in the history of the textile industry.

Textiles from Ypres could be found on the markets of Novgorod in Russia in the early 12th century. In 1241 a major fire ruined much of the old city. The powerful city was involved in important treaties and battles, including the Battle of the Golden Spurs, the Battle at Pevelenberg, The Peace of Melun and the Battle of Cassel.

The famous Cloth Hall was built in the thirteenth century. Also during this time cats, then the symbol of the devil and witchcraft, were thrown off Cloth Hall, possibly because of the belief that this would get rid of evil demons. Today, this act is commemorated with a triennial Cat Parade through town.

After the destruction of Thérouanne, Ypres became the seat of the new Diocese of Ypres in 1561, and Saint Martin’s Church was elevated to cathedral. During the Norwich Crusade, led by the English bishop Henry le Despenser, Ypres was besieged from May to August 1383, until French relief forces arrived. On 25 March 1678 Ypres was conquered by the forces of Louis XIV of France. It remained French under the treaty of Nijmwegen and Vauban constructed his typical fortifications, that can still be seen today. In 1697, after the Treaty of Ryswick, Ypres was returned to the Spanish Crown.

During the War of the Spanish Succession, the Duke of Marlborough in 1709 intended to capture Ypres, at the time a major French fortress, but changed his mind owing to the long time and effort it had taken him to capture Tournai and apprehension of disease spreading in his army in the poorly drained land around Ypres (see Battle of Malplaquet). In 1713 it was handed over to the Habsburgs, and became part of the Austrian Netherlands.

In 1782 the Austrian emperor Joseph II ordered parts of the walls torn down, making it easy for the French to take over the city in 1794 during the War of the First Coalition.
Ypres had long been fortified to keep out invaders. Parts of the early ramparts, dating from 1385, still survive near the Rijselpoort (Lille Gate). Over time, the earthworks were replaced by sturdier masonry and earth structures and a partial moat. Ypres was further fortified in the 17th and 18th centuries while under the occupation of the Habsburgs and the French. Major works were completed at the end of the 17th century by the French military engineer Sébastien Le Prestre, Seigneur de Vauban.

World War I
Ypres occupied a strategic position during World War I because it stood in the path of Germany’s planned sweep across the rest of Belgium and into France from the north (the Schlieffen Plan). The neutrality of Belgium was guaranteed by Britain; Germany’s invasion of Belgium brought the British Empire into the war. The German army surrounded the city on three sides, bombarding it throughout much of the war. To counterattack, British, French, and allied forces made costly advances from the Ypres Salient into the German lines on the surrounding hills.
In the First Battle of Ypres (19 October to 22 November 1914), the Allies captured the town from the Germans. The Germans had used tear gas at the Battle of Bolimov on 3 January 1915. Their use of poison gas for the first time on 22 April 1915 marked the beginning of the Second Battle of Ypres, which continued until 25 May 1915. They captured high ground east of the town. The first gas attack occurred against Canadian, British, and French soldiers; including both metropolitan French soldiers as well as Senegalese and Algerian tirailleurs (light infantry) from French Africa. The gas used was chlorine. Mustard gas, also called Yperite from the name of this town, was also used for the first time near Ypres, in the autumn of 1917.

Of the battles, the largest, best-known, and most costly in human suffering was the Third Battle of Ypres (21 July to 6 November 1917, also known as the Battle of Passchendaele), in which the British, Canadian, ANZAC, and French forces recaptured the Passchendaele Ridge east of the city at a terrible cost of lives on both sides. After months of fighting, this battle resulted in nearly half a million casualties to all sides, and only a few miles of ground won by Allied forces. During the course of the war the town was all but obliterated by the artillery fire.

English-speaking soldiers in that war often referred to Ieper/Ypres by the deliberate mispronunciation Wipers. British soldiers even published a wartime newspaper called the Wipers Times.The same style of deliberate mispronunciation was applied to other Flemish place names in the Ypres area for the benefit of British troops, such as Whyteshaete becoming White Sheet and Ploegsteert becoming Plug Street.

Post World War I
British veterans and civilians created in the 1920s a sacred memory of sacrifice in Belgium. The town of Ypres was made the symbol of all Britain was fighting for and was given a holy aura. The Ypres League transformed the horrors of trench warfare into a spiritual quest in which British and imperial troops were purified by their sacrifice. After the war Ypres became a pilgrimage destination for Britons to imagine and share the sufferings of their men and gain a spiritual benefit.

Due to more recent attention for the Ypres Salient and World War I in general, more attempts are being made to preserve the World War I heritage in and around Ypres.

After the war the town was rebuilt using money paid by Germany in reparations, with the main square, including the Cloth Hall and town hall, being rebuilt as close to the original designs as possible (the rest of the rebuilt town is more modern in appearance). The Cloth Hall today is home to In Flanders Fields Museum, dedicated to Ypres’s role in the First World War.
Today, Ypres is a small city in the very western part of Belgium, the so-called Westhoek. Ypres these days has the title of “city of peace” and maintains a close friendship with another town on which war had a profound impact: Hiroshima. Both towns witnessed warfare at its worst: Ypres was one of the first places where chemical warfare was employed, while Hiroshima suffered the debut of nuclear warfare. The city governments of Ypres and Hiroshima advocate that cities should never be targets again and campaign for the abolition of nuclear weapons. The City of Ypres hosts the international campaign secretariat of Mayors for Peace, an international Mayoral organization mobilizing cities and citizens worldwide to abolish and eliminate nuclear weapons by the year 2020.

The 2 holiday houses Ipericus and Ipericus Two are located in the center of Ypres next to the ancient city walls dating back to the Middle Ages. You’re close to the market, extremely close to the walls and with plenty of parking space in the neighborhood. Built in 1922 right after WW1.

During the autumn and summer you will find a table and chairs outside on the small courtyard of each house to enjoy breakfast, a coffee or have a smoke.